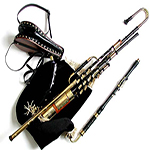 Armagh Pipers Club is an independent traditional music teaching organisation based in Armagh City. It provides classes at various levels for eight instruments and singing. It runs an annual international festival of pipe-based music.

The Pipers Club has developed over six decades into into a centre of excellence. Its music classes have in recent years been attended by children and adults from Armagh and seven neighbouring counties. The annual international William Kennedy Piping Festival, launched in 1994, has attracted enthusiasts of pipe-based music from all over the world. A registered charity, the Club operates from Áras na bPíobairí, its premises in Scotch Street, in the centre of Armagh.

Since the Club was founded in 1966, thousands of young musicians have started their musical journey in the Armagh Pipers Club. Many still play today, some have pursued stellar musical careers as performers, teachers and academics. We have now on our rolls children and grandchildren of our original members.

Armagh Pipers Club, and its founders Brian and Eithne Vallely, have received numerous awards for their contribution to traditional music education. These include the Seán O Boyle Award, Bass Charrington Award, Irish Music Magazine Best Festival Award, Celtic Fusion Award (Castlewellan), Fiddlers’ Green Award (Rostrevor), Gradam Ceoil TG4 Gradam Aitheantais, and in 2018, the BBC Folk Awards Good Tradition Award. So many APC students have gone on to win national awards and accolades that we daren’t mention them here for fear of forgetting some!

Most of our current teachers began their musical education in the Club and now share a wealth of experience and expertise to new generations. They nurture the pupils, develop their confidence and social skills and open their minds to new experiences as performers and listeners. The Club has produced 15 tutor books, which are used in our own classes and anywhere in the world where Irish music is taught, along with other books and a number of CDs and DVDs. Traditional music is cross-generational and we encourage parents to play music with their children.

The Club provides classes for adults and children at a variety of levels in a wide range of traditional instruments – currently tin whistle, flute, fiddle, banjo, accordion, concertina, harp, uilleann pipes – and in singing. These are held on Monday nights in a school in Armagh, with 36 separate classes every week. During the lockdown, we had to move all our classes online, and we delivered hundreds of lessons either recorded and as live Zoom sessions. For 2021-22, we were delighted to move back to traditional face-to-face teaching (with Covid safety protocols). More details of our education programme will be found in the Student Area.

In previous years the Club’s students and their families came together once a month for a session in the Áras. We hope to resume this before the end of the current teaching year.

The Club provides opportunities for its students to hear and learn from some of the leading names in traditional music. It has run Fonn Friday concerts four times a year, each featuring a top singer and instrumentalist, followed by workshops on the Saturday morning. In 2020-21, the Club could not offer face-to-face workshops, so it increased the number of Fonn Fridays to one for every month of the academic year.  In 2021-22, we have had a mix of recorded and live events.

Every November from 1994 to 2019, the Club promoted the William Kennedy Piping Festival, which had to take a break in 2020 but returned in 2021. This is one of the most prestigious festivals of pipe-based music in the world, which normally sees musicians and supporters travelling to Armagh from every continent. The 2021 event was scaled down, featuring mainly Irish pipes with a few international guests, but November 2022 will see a much bigger event. Other performance opportunities for our musicians are International Uilleann Piping Day on 6 November, and National Harp Day in October. We also usually have a Carols Concert in December (which was presented online in 2020), and mark Burns Night in January. The Mark Donnelly Piping Academy, formerly a springtime event, will from 2022 be incorporated into the November Festival.

The Club is a democratically run Company Limited by Guarantee, with a board of directors (who are also its charity trustees) elected directly by and from the membership. You can become a member for just £10 per year. The current board members are Brian Vallely (Armagh), Director of the Club; Eithne Vallely (Armagh), Director of Music; David Flanagan (Dungannon); Judith McClenahan (Portadown); Steven McCusker (Armagh); Siobhan Scowcroft (Armagh); Ruth Acheson (Tandragee); Philip Rea (Loughgall); Bernie Campbell (Armagh) and Thomas Smyth (Armagh). The company secretary is Ciarán Ó Maoláin (Armagh). Safeguarding Officers are Siobhan Scowcroft and Mary McCabe (Monaghan).

The Club is registered with the Charity Commission for Northern Ireland (NIC101109) and at Companies House (NI620647). It is funded by the tuition fees paid by its students, income from the worldwide sale of its books and CDs, box office, private donors, and grant aid, principally from the Arts Council of Northern Ireland and from Armagh City, Banbridge and Craigavon Borough Council. Other recent donors have included the Department of Foreign Affairs and the National Lottery’s Heritage Fund. The Club’s accounts are available to anyone on request.